Until recently we have never needed to change the Ad Preview language settings from English to Spanish in order to preview our clients’ search results for Spanish search terms.

As long as our clients’ Google Ads language settings included both English and Spanish, we never had any issues seeing a preview of Spanish search results (triggered by Spanish keywords) while the Ad Preview tool was set to English.

This problem began recently and was noticed because the Ad Preview tool would consistently state “We don’t know why your ads aren’t showing for this search” when using Spanish search terms and location settings that should have triggered our client’s ads to show.

We decided to try another Spanish account, and then we got a more helpful reason: “The user’s language settings don’t match your campaign’s language targeting.”

After clicking on the “learn more” link at the end of error statement, we were presented with this help box: 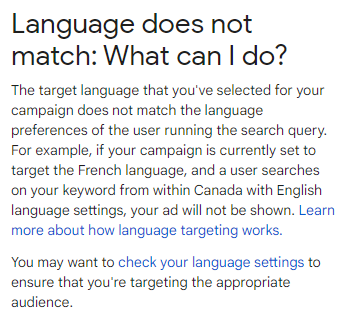 However, after clicking on “Learn more about how language targeting works.” we were taken to page that no longer exists (https://support.google.com/google-ads/answer/43816).

How are the Language Settings Supposed to Work?

According to this Google Ads Help Page:

Target languages on the Search Network

Google Ads on the Search Network can target one language, multiple languages, or all languages. Your ads will be eligible for queries where the keywords match and Google believes that the user understands at least one targeted language.

You might find it helpful to target all languages. By targeting all languages, you can reach people who speak more than one language and may search in several languages.

As we suspected, ads should be shown to individuals when “Google believes that the user understands at least one targeted language.”

Furthermore as shown on the image below, Google states that ads can be shown to people who understand “any” of the languages.

Therefore, if we have both English and Spanish selected in our Google Ads Language Settings, the Ad Preview tool should be showing our clients’ ads for Spanish queries that match his keywords even if the Ad Preview language setting is set to English.

When using an iPhone, we have never needed to add Spanish as an additional language to the Google Browser’s settings in order to see out clients’ Spanish search results for Spanish queries.

However just today we found that we did have to manually ad the Spanish language in order to see our client’s ads. Below is an image of what those settings look like.

We have also noticed considerably fewer impressions and clicks on our clients’ accounts who advertise in Spanish. We have sent support an email and hope to hear back.

Google has confirmed that this issue is being caused by a technical issue on their end.

We experimented further in regard to this bilingual issue and believe we’ve found the issue.

1) Created a campaign using Spanish keywords and Spanish ads that direct visitors to a Spanish website.

2) In our Google Ads campaign, set the language settings to English and Spanish.

1) Tested in Ad Preview, using Spanish search queries, whether our ads would be shown when the “Language” setting was “English.”

2) Tested on an iPhone whether our ads would be shown to folks who search using the Spanish language but do NOT have “espanol” added as a “Language of search results” (as shown above) to their Google browser settings (the default setting is English).

For Test 1 our ads initially did show but within a few days we began to get this message: “The user’s language settings don’t match your campaign’s language targeting.”

For Test 2, we observed our ads for a few days and then they no longer showed.

1) In our ad campaign, we changed the destination urls of the ads to an English version of the website.

The next day our ads were in fact showing in the Ad Preview Tool and in real life, and continued to show.

It is the language of the website to which a visitor is directed that is creating the issue.

We repeated the secondary test in reverse and then back again and there is no doubt.

The language of the destination website (x) must match the language selected in campaign settings (y), or ads will eventually stop showing.

For example: x = Spanish; y = English and Spanish – ads will stop showing to people whose search settings are English.

For example: x = English; y = English and Spanish – ads will stop showing to people whose search settings are Spanish.

This must be an error otherwise what is the point of being able to select multiple languages in campaign settings?

We are a full-service marketing agency that gives our clients' a degree of separation from the rest.

More from our blog 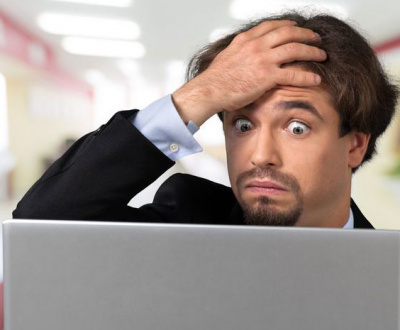 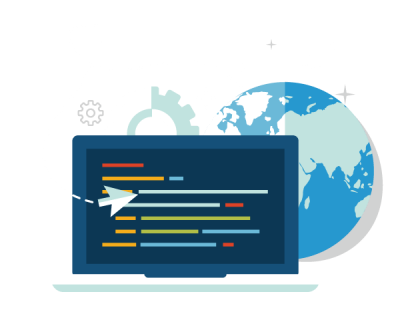 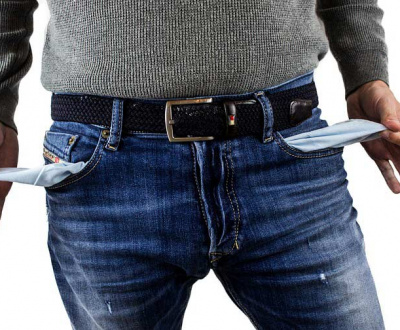 When we learned of the then-new Local Service Ads (LSA), we acted…
Continue reading 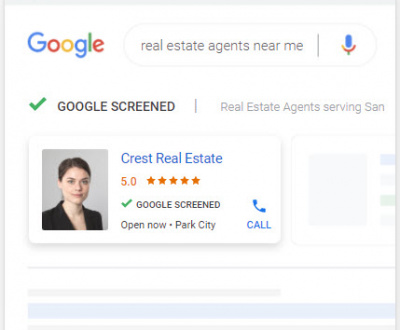 If any of your clients are lawyers, you might have noticed a…
Continue reading 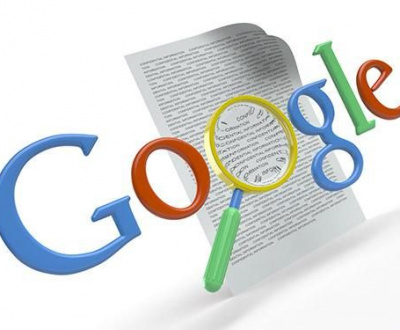 Google is Phasing Out Modified Broad Match Type Yet another questionable change…
Continue reading
Prev. Post
All Posts
Next Post
No Comments